Join us for Dinner 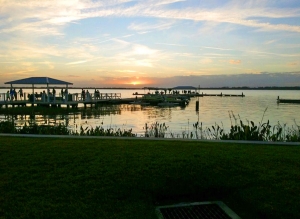 Join us on this decking overlooking Lake Dora to watch the sunset at the only water front view restaurant in Mount Dora. The Mount Dora Yacht Club, the oldest in-land yacht club in central Florida, was built in 1913.

In 1966 the Club burned down but was rebuilt on the same property next to the Lake. 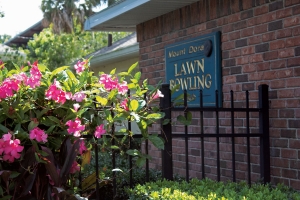 Lawn Bowling Workshops to be held on February 8 and 9 at the Jane Austen Fest in Mount Dora.

Lawn Bowling was one of the few outdoor activities that were considered "lady-like" for Regency Women.
Mount Dora has one of the oldest and largest Lawn Bowling Clubs in the country and have agreed to
teach us how it works.  There is only one other Lawn Bowling activity included n a Jane Austen Festival and
that is in Bath, England.
Published in 2020 Fest
Tagged under
Read more...
Monday, 09 September 2019 13:48 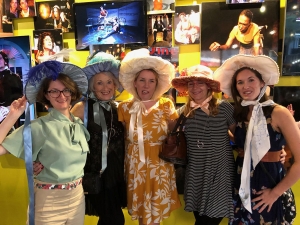 What a Delight! - Mad Cow's Pride and Prejudice

Along with an audience of 50 or more, several JASNA members - Orlando Chapter - attended the Mad Cow Theatre Drama Club's event Friday night.  A professor from Rollins college came and spoke about the history surrounding Jane Austen's novel Pride and Prejudice.  We then saw a rehearsal of the play and a Q & A with the director as well as the cast.  We brought some Regency Hats for a try-on by the audience and an opportunity to tell them about the Jane Austen Fest in Mount Dora coming up Feb. 7, 8, & 9, 2020.  Join us!

Thanks To Our Sponsors

A special thanks to our Volunteers and Steering Committee who have donated their time to make this festival happen. We couldn't do this without you. Thank You. 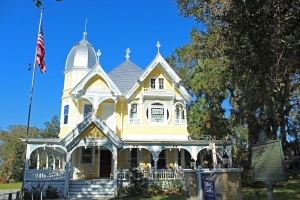 Room availability is limited. Make your reservations early.
CALL THE LAKESIDE INN: 800-556-5016. Mention the Jane Austen Fest to get a fest discount.

Donnelly House
John P. Donnelly, Mount Dora's first mayor 1910 built this 3-story Queen Anne Home in 1893 as a gift to his wife, Annie.  Listed on the National Register of Historic places, the Donnelly House is now owned by Mount Dora Lodge #238 F&Am.  Located on Donnelly Street, it is the site of our Afternoon Tea during the Fest.
Annie Donnelly Park
Located at the intersection of Donnelly Street and 5th Avenue.  Donnelly Park is officially known as the Annie E. Donnelly Park.  The land was bought from Mr. Donnelly for $45,000 by ladies of the Woman's Club in 1924. Located across the street from the Donnelly House, it is considered to be one of the "jewels" of Lake County's Parks & Recreation system.  It is also the location of Mount Dora's famous annual tree lighting.  Ladies will be walking through Donnelly Park during the Fest.  Several activities are planned there as well as the vendors.  It will be a wonderful place to take photos.
Published in About
Tagged under
Read more...
Sunday, 24 February 2019 18:01

In an atmosphere welcoming to all levels of interest and curiosity, the Jane Austen Fest-Mount Dora strives to present a wide array of programs, presentations and excitement surrounding Jane Austen, the culture of the Regency Era and the culture that evolved from it.

Jane Austen, as a woman, followed her passion and is a relevant role model for today’s women. And to that end we want to help today’s woman follow their passion by offering college scholarships as a out-growth of this festival.

A foot in the 21st Century and a toe in the Regency Era. 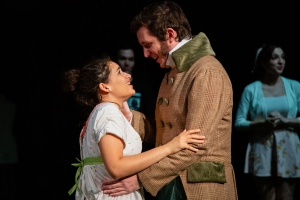 The production itself was a wonderful adaptation of Jane Austen's novel Emma. It was adapted by John Webber and directed by Edward Lewis.  USF School of Theatre and Dance's British International Theatre Program has had a 25 year relationship.
Published in 2020 Fest
Tagged under
Read more...