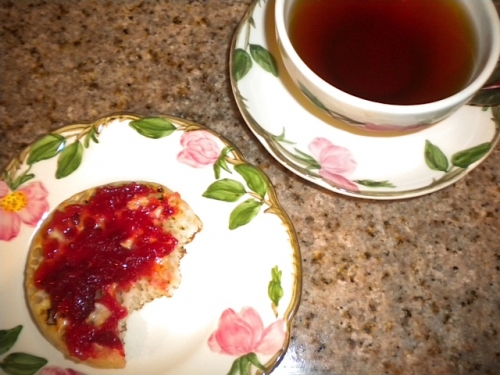 What’s more English than Tea and Crumpets? But maybe the question should be what are Crumpets? Crumpets are a small griddle cake made from a milk, flour and yeast batter. They are popular in the UK.

No they are not English Muffins. Although they are about the same size and in a glance look similar. However, English muffins are lighter, have much larger holes and the taste is “different” than Crumpets.

Crumpets have smaller holes and the taste is “deeper” than muffins.

But would you believe that you can get them right here in Mount Dora? The Magical Meat Boutique sells them either for consumption there or you can buy them and bring them home to eat. Put them in your toaster and push down the lever on your toaster a couple of times until the top is crisp. Smother them with butter and slather on some strawberry jam or orange marmalade.

But wait, join us for a breakfast of Tea and Crumpets on Sunday morning, February 9 at the Jane Austen Fest.