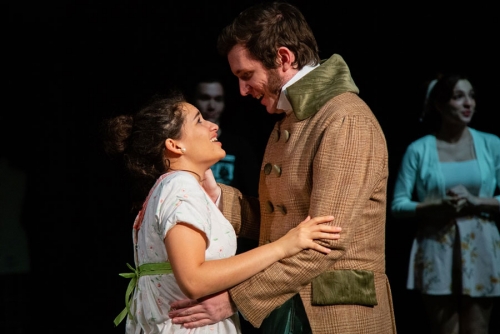 The production itself was a wonderful adaptation of Jane Austen's novel Emma. It was adapted by John Webber and directed by Edward Lewis.  USF School of Theatre and Dance's British International Theatre Program has had a 25 year relationship.
Their were two casts - one was Regency Era and one was a group of modern day actors.  The modern day cast interrupted and interjected modern comments.  Such as when Knightly departs to go to London one modern cast member shouted  "Parting is such sweet sorrow" and another said "That's another play."  Another time when the Regency cast was dancing in regency style. the music changed and they  started dancing in modern style.  It was a perfect way to present an old play to a college audience.
It was a memorable production and we were still talking about it the next day.
Hooray for Emma.

View the embedded image gallery online at:
https://janeaustenfest.com/index.php/jane-austen-blog/item/3-jane-austen-is-in-the-air#sigProIdb7fe33982c
back to top